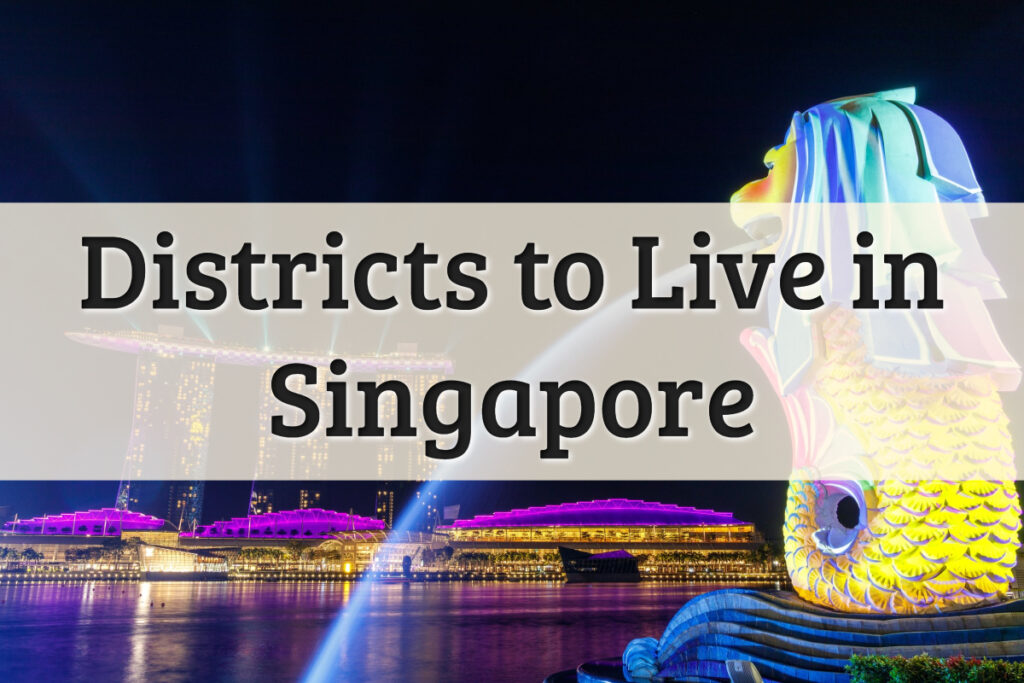 Living in Singapore comes with its own pros and cons. Choosing where to live can make a big difference as each area has its own characteristics. Singapore is considered a city-state, meaning it doesn’t have its own cities but instead divided into five main regions: Central Region, North Region, East Region, West Region, North-East Region.

Expats described the city-state as a melting pot of diverse cultures from all over the world. Hence, you can always expect something different in every neighbourhood.

District 9 fringes Orchard Road, the tree-lined boulevard bordered with boutiques, major stores, and hotels, and the main entertainment and shopping mall area of Singapore. Besides being known as the commercial hub of the city-state, the Orchard area also offers top-tier family residential housing options.

Here you can find grand apartment blocks and towering condominium that provide sky-high affluence living. It does not come cheap, though, since Orchard is located in the Core Central Region after all. Thus, when it comes to the cost of living, expect to pay at least SG$ 750,000 (US$550,000) for a property in this central floor space.

The most popular complex in the area is the Sculptura Ardmore–a 36-storey, 34 unit high block, which has its own cantilevered private pool and a penthouse that’s taking up the two floors. Other developments in the area offer utmost in-city opulence but at somewhat less jaw-dropping prices from roughly SG$30 million upwards.

But despite the retail buzz and high-priced properties, Orchard is many of the surrounding neighbourhoods are leafy and peaceful. Plus, Orchard Road benefits from being at the central location as it’s near several MRT stations and only a minutes walk to Holland Village.

Holland Village or Holland V has to be one of the best neighbourhoods in Singapore and one of the most popular areas for expats due to its central location–close to Orchard and downtown areas, as well as the open area of the MacRitchie Reservoir and Singapore Botanic Gardens. Though home to many families, Holland Village still has a pretty diverse feel with a variety of local shops, bars, and Western Restaurants.

Dempsey Hill, a dining and art enclave, is in close proximity to Fusionopolis, Biopolis, and Mediopolis–a myriad of high capacity office establishments are not far either. The place has one of the best and biggest hawker centres and the Holland Village Shopping Centre is regarded as the area to go to find hidden treasures.

Not only does Holland Village puts visitors and expats in proximity to some prestigious schools and an extensive range of housing options including bungalows, high-quality Housing Development Board (HDB) flats, and landed houses at the quiet Chip Bee Gardens–so you can select the style of living that is suitable for you.

Just like Orchard, Holland Village also has some of the most lavish properties in Singapore, with the most expensive unit priced at SG\$ 110 million for 4, 831 sqm (52,000 sqf).

Tanglin is one of the oldest but more established Singapore residential areas. It is also considered one of the best places to live in Singapore as an expat and is home to various embassies. Properties vary from low rise condominiums to fancy large houses with lush gardens (including an assortment of Black and White houses). Some of Tanglin’s assets include:

Tiong Bahru is a heritage enclave in Singapore rich with retro charm. The houses in this area are designed in an interlocking horse shoe shape, bordering a community centre.

Situated only about 15 minutes outside the city centre, Tiong Bahru has a much more tranquil feel with quiet neighbourhoods and is a nice escape from the skyscrapers of downtown. Expats can also head their way to the Tiong Bahru market, one of the trickles of wet market left in the city to fetch some veggies and meat.

With Art Deco stylings, apartments here are with a rich heritage and are breathtakingly elegant. Many have been widely but sensitively into staggering modern homes. Tiong Bahru has seen a revival of hip cafe restaurants and young artsy shops that have some expats calling it “Singapore’s Brooklyn.”

Just beyond Central Bukit Timah sits Upper Bukit Timah, which is served by excellent connectivity, bus services, and transportation routes like Central Expressway (CTE) and Pan Island Expressway (PIE) along with the Downtown Line and the East-West Line.

Not only that, but the area is also one of the few Singapore neighborhoods home to land properties. You can find a large selection of multi-storey bungalows and semi-detached houses that offer a balcony, private pool, spacious backyard, leafy neighbourhoods, and if you’re fortunate, rooftop views of Bukit Timah Nature Reserve.

Tanjong Pajar prides many of the classically lovely shop house storefronts that give the city its sense of picturesque charm and maintain Singapore’s Malay heritage. Within the heart of the area, Neil and Keong Saik Roads have transitioned into a hub of the island’s growing cocktail and fruit culture.

Sitting just outside the central business district, the neighborhood is home to advertising agency suits and bankers. They appreciate a short commute to work and a multitude of watering holes to enjoy a nice weekend brunch, meet with friends after work, or a romantic night out.

Housing within the shophouses themselves is quite scarce, and honesty–miss or hit when it comes to privacy and quality. However, the neighborhood offers both amenities-rich condo options for those who are willing to pay a premium for a gym and pool facilities, and HDB housing for those seeking to live more locally.

When it comes to living in Singapore, Sentosa has some of Singapore’s most exclusive homes–a couple of which face directly on the sea.s Many expats residing in this area perceive that it has the best neighbourhood feel, with a fairly unique lifestyle and made up of individual from all over the world.

However, Sentosa Island is somewhat a journey from the attraction of ‘mainland’ Singapore, and so you will need to plan your trips to VivoCity–one of Singapore’s largest shopping malls– a bit more carefully, but it is still convenient enough to access by both private vehicle and a special tramline that links to the overall MRT system at the Harbourfront station. Residents of Sentosa Cove also have access to excellent restaurants and numerous recreational activities such as the golf course.

If it’s exceptional sea views you’re after, the East Coast also has a myriad of housing complexes that are situated only a short distance away from the East Coast Park–the long narrow strip along the beach that offers a great view of the ocean and heaps of greenery.

East Coast is also more traditionally regarded as a home base for families. You can find tons of spaces, with ample amenities, for a reasonable price as a much smaller home in the city centre.

A neighbourhood in the north region of Singapore, woodlands are popular among American expats due to their close proximity to the Singapore American School. As the heart of this region, it has all the main amenities close to hand. Though it does mean a commute to the Central Business District, it is a nice area to start a young family.

When it comes to the cost of living, housing in Woodlands consists of Housing Development Board properties and condos, plus large 5- and 7-bedroom houses with swimming pools and yards. You can also find large houses with heaps of green space, a delightful alternative to apartment city-centre living.

Woodlands is one of the fastest-growing places of Singapore and has established well beyond its original roots as a very rural area, home to masses of farms and rubber plantations.

This is one of the most desirable and exclusive areas to live in Singapore for expats right now. It is attractive, amazingly designed, and has a broad green space right at its core for public use. It is popular as the location of the Formula One Singapore Grand Prix, which came about on a street circuit opposite Marina Bay. It also hosts a number of important events in the area, including New Year Celebrations, fireworks, and art shows.

The prime development in the area is Marina One, which is accessible for residential as well as for mixed-use. It offers penthouse suits and up to 4-bedroom apartments, right in the centre of the city. It is linked to four MRT stations for easy commuting across the parts of Singapore. It has gym, private dining rooms, and a pool as well. Not to mention panoramic views of the garden and over the sea.

Neighbouring Marina Bay is Robertson Quay. One of the most peaceful quays, residents here have easy access to Clarke Quay, a party central in the area. Although you’re close to the bustling CBD, expats can still relish the serenity of Robertson Quay. While visitors come for exclusive condos, they end up staying for the lively dining scene. From bars to cafes to restaurants, the buzzing local culinary scene is within reach.

Is Singapore a good place to live? If you have the monetary capacity, then definitely yes. As you can see, Singapore offers tons of options for you to choose from as it is divided into a number of Districts and within these districts, you can find some of the best neighbourhoods for couples, professionals, and families.

Though, there is a list of factors that might affect your house hunting venture in Singapore. Financial is evidently the number one consideration, but house-hunters should also consider the facilities they would like to have access to.

Note that due to the ongoing Covid-19 pandemic, things are quickly changing. Therefore, we hope this article has helped you be well-informed about Singapore’s neighbourhoods before you look online or head out with your agent. Remember to do your research and double-check with professionals to avoid disappointment before you sign and lease a property on the dotted line. 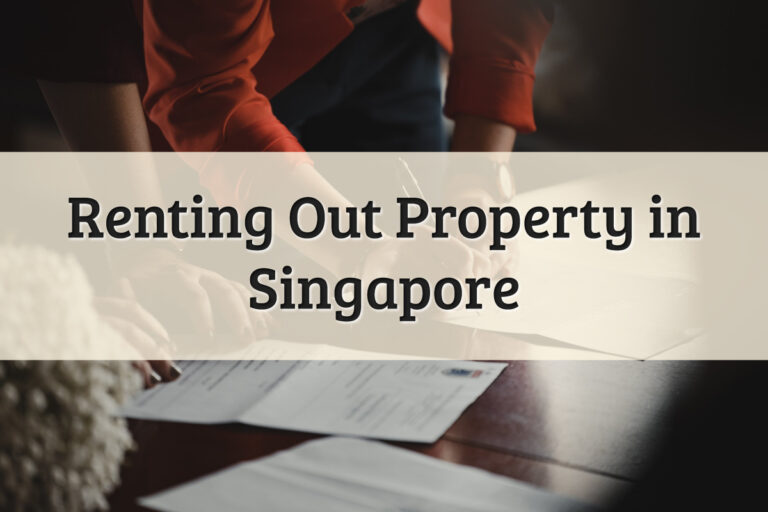 Renting Out Property in Singapore

Most Singaporeans believe that renting out their private property or HDB flat can help them make some passive income that is both sustainable and substantial. …