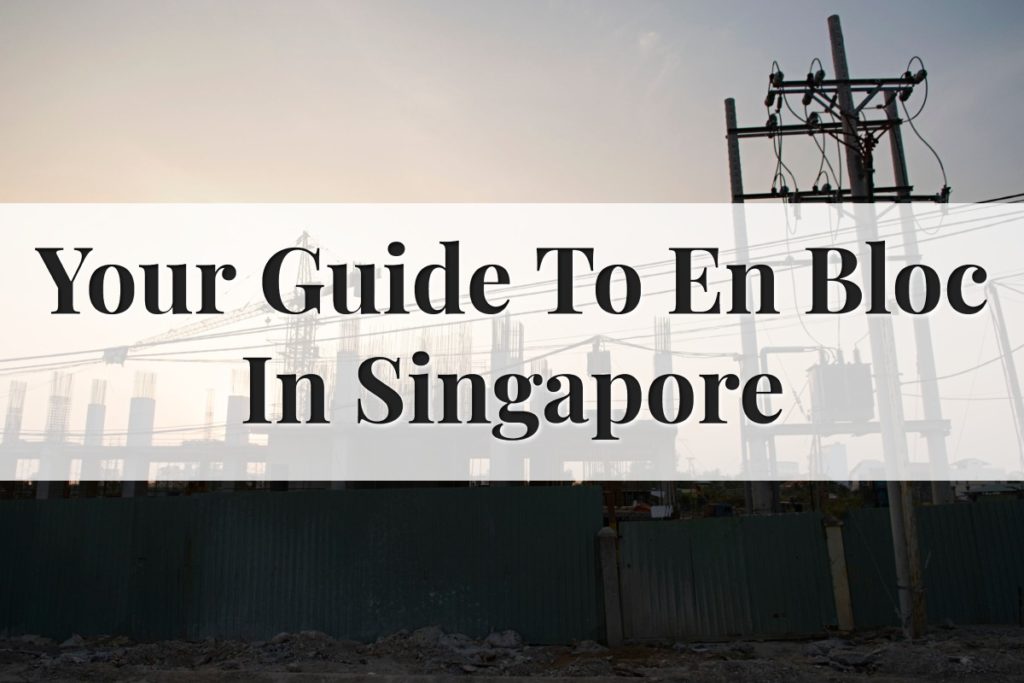 If you are into Singapore property market, then you have definitely heard of en bloc. You might have heard this term at least once from home buyers, estate agents, and property developers. You might also have seen it in headlines like “En bloc Sale Potential 2019”, with a lot of information that you may or may not have understood.

To help you understand what an en-bloc is, here is a quick guide about what it is and how to spot it so you can make the most of the investment opportunities it provides in the Singapore housing market. But first things first – What is the meaning of en bloc?

What Does En Bloc Mean?

If you have been searching for homes for sale in Singapore, you may have seen home listings mentioning “enbloc potential” as a major highlight of the properties. En bloc simply means “collectively” and “altogether” in French. So, it means bringing stuff together in a group.

How Does En Bloc Occur?

To know how much money you can make with an en bloc sale, you need to understand the en bloc process. An en bloc or collective sales can occur in three ways:

The first way is where homeowners see an opportunity to benefit from one lucrative sale. Once the units are sold, each owner gets their respective share.

The second way is where a prospective buyer reaches out to the homeowners and tries to convince them to sell their homes. In such a case, the homeowners cast their votes to decide whether to sell or stay. In such a scenario, however, there are chances of conflicts between the sell and stay groupings.

The third way is where a company might approach the homeowners pretending to buy, and then sell it to another party as a middle-man – thereby enjoying the profits.

The recent global financial crisis had far-reaching effects on the economy as well as a huge impact on the Singapore property market. Before that, there were frequents en blocs, giving both developers and homebuyers their expected profits. However, people might be less interested in an en bloc due to the financial risks involved. Then again, there is an increasing demand for commercial en bloc land areas. On the other hand, residential redevelopment properties were negatively affected by the cooling measures.

What Happens During An En Bloc?

There are generally 3 options to begin an en bloc:

Once any of these steps happen, the below steps take centre stage:

2. Establishment Of A Pro-Tem Committee

The prospective sellers create a pro-tem in order rally interest in an en bloc sale. It is important to point out here that a pro-tem is different from a Collective Sale Committee (CSC). A CSC team represents the sale later in the Strata Titles Board. In addition, the CSC members range from 3 to 14.

The pro-tem team calls for an Extraordinary General Meeting (EGM) to determine if 80 to 90% of the owners support the sale.

3. Working With A Law Firm And Property Consultant

If the pro-tem committee generates enough interest and bids, the next step is to hire a law firm and property consultant. The consultant ‘s role is to promote property development and to provide a reasonable valuation (reserve price) in consultation with an independent valuer. On the other hand, the law firm is tasked with handling the legal paperwork. Therefore, these play a huge role in determining the success or failure of an en bloc.

The pro-tem committee then presents the following details based on the advice given by these experts:

It is important to make things clear beforehand so that there is no miscommunication later on.

4. Having The Majority Of Property Owners To Vote Yes

It is not easy to get all the homeowners to vote yes. For a property older than 10 years, 80% of the unit owners should reach a consensus. Whereas, for a property that has been around for less than 10 years requires a 90% majority. Also, votes are allocated depending on the share value instead of the number of houses one owns. The major shareholders have a higher number of votes. The minority is given a chance to protest because of laws associated with Seller’s Stamp Duty (SSD).

5. Sale Of The Property By Tender

If there are no bidders, the property must be marketed to interested buyers. The property consultant handles everything at this stage. It can take a significant amount of time, depending on the size and condition of the home, but generally, it takes 3 to 4 months.

6. Application To Strata Tiles Board

This phase occurs if 100% of homeowners are not convinced to sell their home for financial reasons. According to the regulations, the CSC makes an application to the board. If any of the homeowners are going to suffer a monetary loss, then the board won’t approve the sales to proceed any further. If everyone appends their signature, then approval is typically not required.

A financial loss can be described as receiving an amount less than what an individual paid for a unit (including any other relevant costs). For instance, if an apartment was bought at $4 million, and the selling price was $3.5 million, then it would be considered a loss. However, if you get $4.5 million, whereas others get $4.6 million on en bloc projects purchased at $4.2 million, then it’s not considered a financial loss.

After the completion of the sale, owners must vacate the premises or make arrangements with the residents or tenants for that matter. The buyer may have to extend the tenant’s stay if they delay the payments.

The complexity of the process means that many developers prefer government land sales over en bloc sales. Since not all properties are En bloc potential, it is important to understand what makes a property worthy of an en bloc. One great way to understand the en bloc sale potential is to see the evaluation phase of the REI method.

For instance, the most recent collective sales cycle in Singapore took place around 2005 to 2007, where the total sales amounted to $22.3 billion for a property of 12,000 en bloc units. This figure is enough to adequately supply aspiring Singaporeans with brand-new condos or apartments. 27 Singapore en bloc sales occurred in 2017 alone [1], with enbloc news reports showing that the total sales were around $9 billion.

Investors continuously monitor these changes to understand the pattern in order to make informed decisions. Here are some helpful guidelines for identifying an en bloc Singapore.

The price movement in en bloc mostly happens due to the developers who purchase property hoping to benefit from a price increase in the market and continue to improve it in the hope that the property prices will continue to rise. In such a case, there is development risk and cost involved, so it’s important to check to monitor such price changes and keep a close eye on sudden increases in a given place in the neighbourhood.

This is another important factor because it shows how taller and bigger projects can be built on the land area to gain maximum profits. You can easily access the plot ratios on the URA website, thereby reducing time and effort that would otherwise be needed to manually check each location.

The troubling part of en bloc sales is getting the consent of the owners. Since they own the land, owners of freehold condos may be more willing to sell the land to developers or the government. Therefore, condos are a great option for en bloc sales. For starters, it is much easier to reach a sale agreement since there are few owners.

In the last few years, there has been a constant increase in freehold condos. As a result, many developers are taking a look at the benefits that these buildings have to offer.

The older the property higher are its chances to be in an en bloc sale. This is because there are high costs associated with the maintenance of old properties. If you see a land that is old and you see that the surroundings are likely to do the same soon, go for it as it will adjust your plot ratio sooner or later.

The properties with 50 houses or less have high chances of getting into the en bloc market. The fewer the owners the higher the profit each owner gets, and the easier it is to get the consent for selling. As a buyer, going for such properties is always beneficial.

In the end, en bloc sales might be a godsend or curse, based on how you see it. It can deliver an instant financial return due to increased prices or be a breach of your rights as a home owner. Although it’s frustrating to be forced go against your will to sell your house, all is not lost since there are plenty of prime properties for sale in Singapore and those sale proceeds may come in handy when you get your foot into the housing market again.

You may also be interested in the following articles: